This Monday, I participated in a career day at a neighborhood middle school.  There I spoke to a number of eight-graders about where I’m from, my education background, what I do now, but most importantly, my words of wisdom on how to be successful in life:  Dream Big, Work Hard, and Give Back.  As each 20-minute presentation progressed, I notice that my body language and tone to the students became increasing more intense:  I’m turning into that old man who every kid makes fun of behind his back.

Initially, I was very energetic and light with my approach.  This wasn’t my first career day and I love doing this and students are normally very receptive.  However, this time was different.  The students were still students; there was nothing different about career day program.  There was a difference in me.  For the first time, I was interacting with kids that directly affect me: these students were in my neighborhood.  These kids directly affect the future of where I live.  Knowing that, I started acting different.

All of a sudden I had a duty, not option, to excel.  I can’t just entertain these students; I need to make sure I equip them with as much information in 15-20 minutes as possible so they can be successful in life!!!  I need, through osmosis, tell them my life’s struggles, my mistakes, my successes, the struggles of Black America, the responsibility of next generation of leaders, what schools they need to go to, what organizations to join, what they need to do in order to be great people.  The students were puzzled.  “Why is Mr. Matt so intense?”

It was then that I understood the plight of the Grumpy Old Man.  GOMs see something in us we don’t:  they see our potential, and how we are not maximizing it.  They see all of their mistakes and don’t want the younger generation to fall into the same traps.  They are crying out to us, in their own intense, senile way.

How can we as a society successfully marriage the relationship between the”Young Bucks” and the GOMs?  I have a theory:  If there are more people advocating positive messages to the community, a small  population won’t feel the need to overwhelm themselves with the burden to tell everyone what to do, minimizing stress and eliminating the “grumpiness” factor.  We, as adults (both young and old), can do that by mentoring a young person, joining organizations (like Big Brothers/Big Sisters), and showing our young people what it means to be a positive contribution to society. 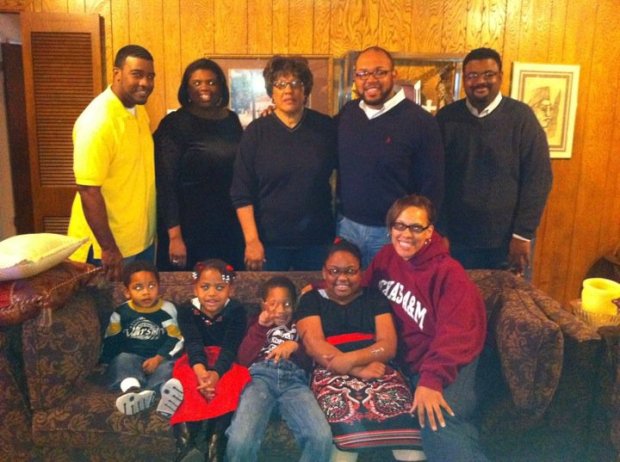 On yesterday, I had a spontaneous BBQ at my house where my family and friends ate, fellowshipped, and watched the NBA basketball game.  It was a nice event.  Though it was last minute, and I had work to do, we were able to cook some food, people chipped in and brought sides and we had a great time.  It was very relaxing.  I felt complete.  I’ve been doing a lot with work and organizations I’m a part of, so I haven’t been focusing on my personal life lately.  As I reflect on yesterday, I thought of an important lesson, particularly to the “busy” people:  No matter how successful you are professionally or civically, you have to take time out to spend time and enjoy your family.

“The love of a family is life’s greatest blessing.”- unknown

Throughout my adult live, my goal has been to impact every person that I come in contact with and to change the World to make it a better place.  While this aim is lofty, and demands a lot of my time, energy, and resources, I’ve showed some progress.  I’m a part of a company whose mission is to motive and inspire children to achieve excellence academically, I’m affiliated with organizations that, from their missions, focuses on the advancement of people socially, economically, and spiritually; and within those organizations, I’m blessed that the members recognize me as a leader, which allows me to move into leadership positions.  With all of this, I forgot to focus on my family.  I’m missing out on God’s greatest blessing.

I often assume my family will be there.  That they don’t need me.  That they understand what I’m doing and will support me, even if I don’t support them and their efforts.  That’s not the right thing to do.  I have two nieces and nephews, and my goal is to illustrate a strong, caring, successful man in their lives.  It can be gone in numerous ways:  giving them money, gifts, tickets, but the most impactful way is to show them I care by being in their lives.  I want my nephews to see me at their soccer/football games.  I want my nieces to see me at their recitals.  Kids don’t care about money… they care about love and support.

How can I do this?  What can I (we) do in order to improve our families?  I admit I am a hypocrite.  I realize I need to spend more time my family (particularly with my nieces and nephews) so they can understand their Uncle Matt.  When this happens, the Houston and Hunter family will grow even stronger because positive adults are impacting America’s future.  The same applies to our society.  We need spend more positive time with our young people.  Our youth, though rebellious, wants direction and boundaries (boundaries is the only way we tell someone is defiant…).  Let’s be that positive role model for them.  Sure the road is not easy, but it’s well worth it.

“Being defeated is often a temporary condition.  Giving up is what makes it permanent.”

I now understand why people quit after being defeated.  It’s easy.

This week I did something that I could regret for the rest of my life.  It was nothing immoral or illegal (actually it was totally innocent), but it was taken out of context and offended a lot of people.  Though I am one person, I realize a single action can change the course of history, for better or worse.

Since then, my life has been a roller coaster ride mentally.  I’ve gone from the top of the mountain, feeling like I’m contributing to society in every aspect of my life, to the bottom of the valley.  I feel like giving up, quitting, running away, all at the same time.

Normally I like give advice on how to make the world a better place and support to people who need it.  In my typical blog with the subject of perseverance, I would encourage people to fight the good fight and don’t give up, because in order to build better communities, cities, and country, we have to persist through the good and bad times.  I would then use examples of how our ancestors didn’t give up.  When George Washington and the Patriots wanted freedom from Great Britain, they persevered so we can become America.  When Africans were kidnapped from their homeland, enslaved unjustly, and force to stay in oppression, they didn’t give up.  They fought for their freedom so I have a liberty to write this piece.

I can’t write that now.  I don’t have the answers.  All I feel is pain, defeat, and disappointment.  The motivational “pick me up” will not suffice now.  I need something better.  The movement sucks…  Quitting is easy.  The only reason why I haven’t is because I was taught not to.

I need you all to support me.  I need to support you.  We need each other: in the best of times and worst of times.  I fully see how the season of light can turn to the season of darkness so quickly.  Regardless, giving up is easy, but it’s not worth it… We have too much work to do.

As I reflect on how we’ve overcome as a people, displaced Africans in a foreign land against our will, fighting for our freedom, and then fighting for our equality; all at the same time contributing to society in the world of agriculture, science, the arts, technology, etc., I realize presently we are not doing what we are suppose to do.  We are losing…

Ricky Bobby’s father said it best, “If you’re not first, you’re last”.  In America, even though we are considered one of the most advanced (and innovative) nations on Earth, we are still not the best.  We are slacking in education (9th among industrialized nations from ages 24-35), and it’s even worse in Black American culture, having Black males among the worst in standardized test scores across the board.  Without education, we cannot progress as a people!

How do we correct this?  How can we educate a generation of people who we’ve lost because of our own selfishness and self-gratitude (greed)?  How can we get back on track in order for America to be on top again like we were 20 years ago?  The good news is we are capable of making the change.

As stated in the beginning of my rant, Black Americans were enslaved and forbidden to read, write, and learn in general.  We defied this by doing whatever necessary to become literate.  Some ran to freedom, some read secretly and taught others, some even positioned themselves amongst Whites in order to be in the environment where education was prevalent.  We did ANYTHING to make it work.  We were hustlers grinding to better ourselves.

We still have that “hustle” mindset.  In Hip-Hop, when artist like Jay-Z, Diddy, Russell Simmons, and others used their talents, skills, and education to build an empire from their vision, it’s proven we are capable of living the American Dream.  In athletics, the Michael Jordan story, where MJ was cut from his HS Varsity team then worked his way to being the most significant basketball player in history shows that hard work pays off.  We have numerous examples in our culture to show this… we just don’t care to look.  WE ARE TOO LAZY TO EVEN CARE…

What now?  As a people, we tend to rise to the occasion once we either feel threatened or oppressed (being reactive).  It’s proven:  we fought slavery by the civil war, fought racism by the Civil Rights Movement.  Once we acknowledge a problem, we solve it.  The issue with us now is that we don’t have these feelings.  We don’t think anything’s wrong.  I’m here to tell you:  WE ARE OPPRESSED.  When about 1/3 of our black men are either in prison or juvenile detention, we are oppressed.  When our black women have some of the highest STD infection rates in the country, we are oppressed.  When the black unemployment rate is double than the average, we are oppressed.  When black teenagers can’t finish school because they have children and they need to support their family in order to survive, we are oppressed.  LET’S WAKE UP!!!!!!!!!  THE OPPRESSION IS HERE!!!!!!  NOW LET’S FIX IT!!!!!!!!!!!

We’re losing, but we haven’t lost yet.  Let’s be proactive.  Let’s make a goal to positively change the life of one person instead of tearing them down (it’s not that hard, I promise).  Once you see a person improve, a euphoric feeling will go through you and you will be energized to help another.  It’s so easy: open the door for someone, make someone smile, teach kids how to read, show a young man to line up his shirt with his belt and his pants to show the importance of not sagging.  It’s very simple.  We just have to be stewards of the gifts God gave us.  If everyone does this, we will make the world a better place.

I’m done…  I can go to sleep now.  I’ve finished my reflection.  Have a goodnight.